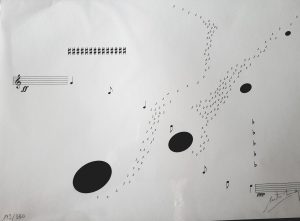 Josep M. teachers Quadreny, born in Manresa (Barcelona) the 1929, is one of the innovators and popularizers most significant contemporary music in our country.

His involvement with the recovery of culture the fifties and sixties led him to participate in private initiatives of cultural activism as La Ricarda Club 49. Its creator and affinity friendship with artists such as Joan Brossa, Joan Miro, Pere Portabella, Carles Santos and Moisès Villèlia have given rise to collective works. His music is characterized by a constant renewal of the sound and the incorporation of new techniques, both in terms of composition and instrumentation. The work covers various fields of Teachers Quadreny, from the conventional sheet to sheet graphics, through the use of computers and composition based on mathematical algorithms and theories of chance. A band be a pioneer in Spain in the use of computers to generate compositions, it was also in the construction of graphic scores beyond conventional staff. The first composition that was released publicly in the IV International Meeting of Young Musicians in Bayreuth (Germany) the 1953. Since then, his compositions have been performed on stages around. He has published books and Brossa Perejaume, and has composed for film makers. He has written several essays on music, among them Think and make music (2000).

Scores of his musical compositions have become visual art works “visual music” some of which are part of the MACBA.