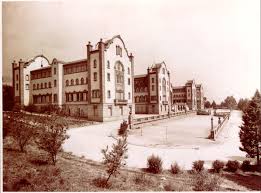 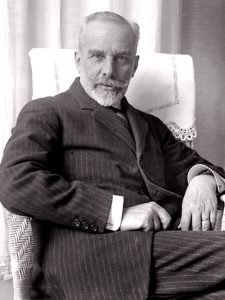 Ferran and Josep Enric Sagnier was born in Barcelona Villavecchia 21 March 1858 and died on 1 September 1931.

Son of Luis Sagnier and Nadal, man a solid humanistic education that instills his son, along with his wife Clementine Villavecchia Brugueras.

He was founding member of the Artistic Circle of St. Luke, Treasurer on the first board of the Circle 1893 i president the 1903.

El 1904 Domenech i Montaner with raised ground plans of the future Palace of Catalan Music.

It will be deputy provincial twice, the first the 1903 when it came to elections 8 March heading the list League District II, with the depicted the conservative Catholic organization Center of Social defense who was the second vice president and the second time as speaker of Development.

El 1911 entered the Academy of Fine Arts of Sant Jordi, where he was second counselor.

El 1923 was granted by Pope Pius XI pontifical title of Marquess of Sagnier after the construction of the church of Our Lady of Pompeii Barcelona.

It will be Alternate architect of the Diocese of Barcelona. He also worked for the Monastery of Montserrat.

He participated as a member of the jury of the National Palace.

Sagnier was a tireless worker, has the support of family and especially his wife Dolors Vidal-Ribas i Torrents do not hesitate to help Sagnier at work even in the delineation of planes. From their union were born three children with pain, Josep M., Henry and Ignasi. Josep M. He who keeps the office he inherited paternal and at first their style and their customers, that was just the Sacred Heart of Tibidabo after the death of his father.

Enric Sagnier had a great capacity for work, which allowed him to work with several projects simultaneously.

The City Council recognized his work on several occasions giving it all the Special Gold Medal of the City of Barcelona, the 1901 for the Casa Juncadella Rambla de Catalonia. El 1916 Charity Group of the Provincial Institute for the Protection of Childhood and Repression of Begging in the streets Pamplona, Wad-Ras. He also received the Encomienda of the Order of Alfons XII.

It was one of the architects preferred by the Barcelona bourgeoisie of the late nineteenth and early twentieth centuries, as reflected in the ornate facades of the buildings planned, which was very personalized. In the facades will be influenced more by the prevailing fashion, while the interiors were practical and consistent with the needs of developers, while still more traditional guidelines.

Sagnier created a typology that meets the needs of the moment, For this reason took root and was accepted in the projection of the terraced houses of the Eixample Quarter. Les escales les comunicava amb els patis centrals amb il·luminació zenital, did distinguish two sectors, night and day, in other words that is, the facade and interior. Projected structure keeps parts in two perpendicular directions corresponding to the bearing walls.

The figure of Sagnier is a good example to understand the change that was taking place at that time in the organization of work, where the foreman happened to second term, while the architect took center stage, being in charge of coordinating the different trades in the construction of buildings.

Despite having a long career overshadowed by the figure stayed two great architects Domenech i Montaner and Gaudi is moved while the two Jover Architects Jujol mas, Oriol Bohigas as presented in a ceremony in which participated on the Enric Sagnier 1998 al Col·legi d’Arquitectes de Catalunya a Barcelona.

Sagnier, Young worked with Domenech and stage works Courthouse (1887 – 1911). El 1895-1902 made the building of the New Customs along with Pedro García Faria and 1901 Planas Palace in Paseo de Gracia.

In its buildings are searching for originality in composition and decoration elements from classic preferably utilized. Normally used in Montjuïc stone facades and decorated with sculptural reliefs.

The capacity for work and originality led to a Sagnier designed a number of buildings which suggests the dominance of traces of past styles, classic, Baroque, French Rococo, gòtic violletià, Moorish, and the combined results in distinct styles of houses despite being projected at the same time. The combination of styles allowed him to adapt to any situation and to changes in fashion that the audience, preferably gentry and religious institutions he ordered in a city that was expanding.

We could say that his work went through three different moments: eclectic, modernista i classicitzant. Adapt the structures of the past to new needs. Incorporating new materials like cement. The fact that at present their buildings are preserved or rehabilitated an idea of ​​the quality and durability of their buildings.

In buildings with the Convent of Jesus and Mary in Sant Gervasi to the house n. 2 Passeig de Gràcia is very strong goticisme, then this style will not be so pronounced and will gradually doing without these elements, use only as decorative elements such as chamfers houses in the streets Girona-Ausias Mach and Ali Bey. The Pension Fund of Via Laietana realized 1917 uses more Gothic style renovated.

We must also talk about the evolution of their buildings towards the French Rococo, a good example of which is the tower of Tibidabo Arnús 1904 Casa Fargas and the Rambla Catalonia n. 4 the same year, among other buildings. Who also works with the more conventional church and convent Pompeii parents Capuchins, Ribas and the Board of Trustees of the temple of Tibidabo latter finished by his son Josep M. At the end of his life he designed buildings evoking other styles like the church of Sant Josep Oriol the Renaissance 1926.

You can read the post about Casa Antoni Roger