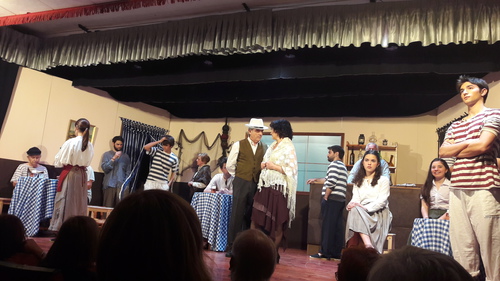 In celebration of its 40 years 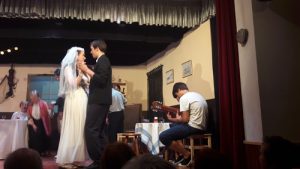 The work is located in Port de la Selva, village on the Costa Brava, i presents a seaside cafe, where a girl, Caterina, has been abandoned by her lover. His sadness is evident when his sister Rosa married, while she has to endure the rumors and whispers that occur in the cafe where she works, where privacy does not exist. In this environment can only marry a stranger leaving fish Banyuls, older than her.

in the meantime, was developing a secret love towards latent Claudi, a fisherman genius alcoholic who wants to leave America, as an escape route, because people do not see the future.

playwright, journalist, novelist, memorialista, i translator, above all, poeta.

Theto use a living language rich, the use of rhetorical resources of great plasticity, and above, the desire to entertain and move the reader or the viewer, connecting with the public and the popular reader and is rewarded with resounding theatrical success, with The crown of thorns, (1930), Hostal de la Gloria (1931), The Café de la Marina (1933) one to Boulevard of the florists (1935).

The novel Private life (1932) is considered the emblematic novel of Barcelona.

He regularly collaborates with the press and brings together some of these collaborations in two volumes: Café, copa i puro (1929) i The appetizer (1937). El 1938 established in France which is dedicated, essentially, a la Translation divine Comedy. El 1940, return to Catalonia, joined the clandestine literary life and, With the help of some patrons, completes the translation of Dante, Shakespeare theater translates and writes a pleasant and extensive Reports (1954). Much of his works are translated into several languages ​​and some are carried to the movies and on TV.