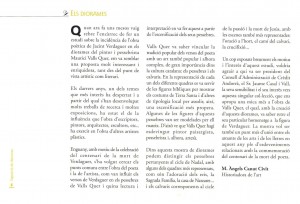 When a few months ago I was commissioned to do a study on the incidence of Verdaguer's poetry in Nativity scenes and dioramas painter Maurice Valleys Quer, I found a very interesting proposal and enriching, both from the standpoint of artistic and literary.

In recent years, some of the issues that has aroused more interest and from which have developed many research and many exhibitions, has been the influence the work of writers, painters, Architects, Sculptors, etc., has played in the work of other artists.

This year, because of the centenary of the death of Verdaguer, wanted to find the commonalities between the work of the poet and the artist, as influenced verses Verdaguer us the cribs Valls Quer reading and interpretation and how did this from the staging of their cribs.

Quer know valleys linking the popular tradition of the poet's verses also a popular yet complex art, of great importance in the Catalan culture: the cribs and Calvarys. The representation of each of the different boxes, was used for biblical figures show the customs of the Holy Land and other types of local reach, thus, staging a closer. Some of these nativity figures were modeled itself. This is it Quer has become valleys landscape painter, i pessebrista, same time, Craftsman.

Within this dioramas showing the cribs can be identified belonging to the cycle of Christmas, some of the pictures represented more, such as the Adoration of the Magi, The Holy Family, House of Nazareth… and Calvaries cycle corresponding to the passion and death of Jesus, with more scenes also represented: Prayer in the Garden, The Road to Calvary, Crucifixion…

Once exposed briefly the reasons and the interest of this study, I would like to thank who was president of the Board of Directors of Credit Andorra, el Sr. Casal and James Valley, la seva sensibilitat i el seu interès vers aquesta singular col·lecció, that brings us a little closer to the work of Valleys Quer, which, the creation of these dioramas, knew his pay particular homage to Verdaguer. Thesample also wants to be a point of union between the lovers of arts and letters in this eventful year related to the commemoration of the centenary of the poet's death, Verdaguer.