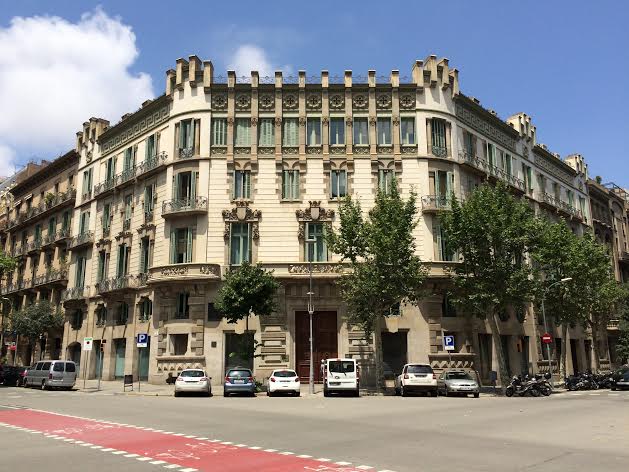 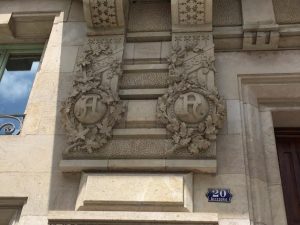 La Casa Antoni Roger is located in Girona street n. 20 Barcelona, known in Quarter manufacturers, and built between 1888 i 1890. It will be one of them first achievements of the architect Enric Sagnier and Villavecchia (Barcelona, 1858 – 1931).

La Casa Antoni Roger is a large building, is part of the neighborhood of townhouses to rent, dividing between the bourgeois class was built in the lower right of the widening.

The building was designed according to the needs of the time. The areas were determined by their functionality: two scales, Specific halls and theaters, canteens, bedrooms and bathrooms, differentiating might say that the area day and night area in order to provide greater convenience and comfort in homes. Initially it had three floors and mezzanine. In a subsequent rehabilitation, made by architects Jaume Llobet and Josep Benedito, built another floor, adaptation of the tenement house to a building official.

Currently the Casa Antoni Roger is the headquarters of the Public School of Catalonia and the Catalan Institute of Mediterranean Studies and Cooperation. The facade of the building, was not altered by this rehabilitation.

On the facade look like Enric Sagnier alternated classic and medieval, Ionic columns and a kind of fretwork crown crenellated Renaissance.

The central part of the building, ie the front of the chamfer, is the most important, which included more decorative and stood on balconies leading, the windows and the door that leads to a large lobby with large-scale noble stone.

On the left side of the front there is a bas-relief Artistic Circle dedicated to the memory of Enrique Granados and his wife.

The end result of the combination of all these elements is an absolutely symmetrical facade where the proportion of openings and solid Perfect. The treatment of the edges of the corners is well settled, although an excessive importance to women battlements.

In this building Sagnier using the iron, brick and stucco facade types for petro. At the gateway of the street is a coated backing to give more importance to the door. The balconies of the corner is of great importance.

The railing is pierced stone and are crowned with the lead at the time should be the shield of the family Roger, nonexistent today, on the borders of the dressing of the shield initials are reproduced A.R.

At the top of the building there is a railing pillars which are an extension of the pillars of the facade of the corner. In the facades facing the streets Ausiàs March Girona and the pillars have been replaced by blocks of stone. Both pillars like stone blocks were alternated with a wrought iron railing. It should be noted that the significant eaves give a monumental aspect of the building.

In front of the corner there is a kind of stone rose, that acts as insulation and ventilation chamber, this building, only ventilates the corner, Girona and then in the streets Ausiàs March change the decor of such a fretwork rose very important woman in the building pace.