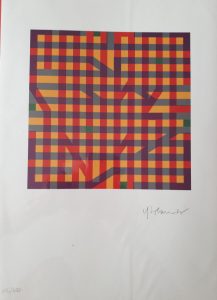 He studied at the Faculty of Architecture of Universidad Nacional del Litoral (UNL) Santa Fe as support for their aspirations Designer. Arranged with other studies on painting, photography, typography, design and economy.

He served as art director in publishing and design agency. Later in 1967 moved to Barcelona where he fixed his residence permanently, from where he contributed to the renovation of design in Catalonia.

He specialized in corporate design and brand creator was of major companies and institutions such as Camper, Roca, Arco, Fagor, Ifema, Book club, Pegaso, Grupo Mondragón, Astilleros Españoles, Unequal, Barcelona Stock Exchange, the Ministry of Finance and Public Administration, CSIC and the municipalities of Bilbao, Toledo Castelldefels among others and also for events like Arco, Expo Sevilla'92 or Madrid 2016 ...

Also noteworthy their contribution to sculpture.