published in the Bonart Magazine 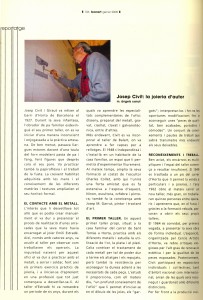 Josep Civit i Giraut was born in the district of Horta in Barcelona 1927. During his childhood, the workshop bread family became its first workshop, which began in an unconscious and playful practice craft.

The'm menut, spent long periods in front of a table of baked bread dough and modeling clay, figures cooked by his father after. He also practiced origami and woodworking. Growing acquired skill with the hands and the knowledge of different materials and textures expand your horizon formal.

The interest that awakened everything you could manually perform led him to witness the process of making earrings that her mother had ordered the Emili jeweler Estradé. So, only fourteen, attended the workshop and see how they worked operators. The rising concern for this job took him to practice with the metal, serrar to the soldar, thus making the first exercises jewelry, and begin to learn a profession that was just beginning to awaken him. At the workshop Estradé There he remained six years, during which learned the trade of complementary specialties: Design, prepared metal, recorded, cisellat, galvanotècnica and nailed, among others.

Later, Civit joined the workshop Balart, where he learned to make boxes for watches. To the 1948 becomes independent and settles in a living room of the family home, a space that allows you to experiment freely. At the same time, expands its training alongside the sculptor Charles Collet, who will join the strong friendship that extends to the wife of this, Ninon, Sculptor, orfebre the pintora; also makes the acquaintance of Joseph M. Garrut, painter and art dealing.

In this first workshop itself, located in the family home in St Thomas Street Garden, practice with different metals and studied the use of gold, silver and platinum. Needed to know about each metal in order to carry out alloys and embossed, but also the resistance to achieve appropriate hardness to the needs of each piece. The study provides, as he says "A deep understanding of the trade" that allows you to begin the drawing of jewels, the "Scribble"; interpret them and make the necessary changes to achieve "quality parts, ends well, portable and comfortable ". A set of knowledge and work patterns will know later transmitted to his disciples.

Soon orders are increasing and space workshop begins insufficient. El 1949 moved to an apartment on Orchard Street that allows the sale to individuals and jewelers. And in 1962 opens a new shop in the same street, higher, Fifteen people will work between workers and apprentices, in the future, thanks to the training received, will open their own workshops.

El 1964 is invited, first, to present their work individually. Exposure, organized by the Cercle Artistic Garden, He received critical praise for the high level of aesthetic renewal and quality of the exhibits. Later, Civit will participate in individual and group exhibitions, both nationally and internationally, result of which will be recognized and awarded several distinctions.

To cope with the growing production and diversity of pieces executed, you still have to make, to the 1970, a final transfer workshop, this time on the street Marti Alsina, also the district of Horta, where twenty-five collaborators will work. Shortly after, open a jewelry.

The pieces wrought Civita respond to two different criteria. On the one hand, the joy of research with which the artistic reaches a greater role: unique experience where those materials and techniques considered valid as plastic objects. I, the other, Jewel made as part of series production, more commercial, in which, despite repeated modeling, finishes are made manually in order to maintain the appearance of the craft craftsman.

Part of the production was intended to market in Europe and the US. All achievements responded to the drawings designed by the goldsmith who, once worked, patented.

Throughout his career, Silver never lost prominence, Josep Civit it actually declares passionate. The wealth of captivating qualities offered, oxides and textures; manageability resulting from the combination of different alloys that allow you to elaborate jewelery and wide range of formal, which also highlights the great care of finishes. With great delicacy, served to accompany this metal sheaths and different elements, result of the study, interest and observation of the immediate environment and the farthest, incorporates into his art. Adapta, thus, a variety of jewelry items --the Formica, and more d'Oregon, sheets pissarra-- reinterpreting all natural forms. Reading books on anthropology, new ideas emerge in, jewelry and objects reminiscent primitivist.

The work shows Civita, since its inception, a coherent policy, innovative and makes sure to avoid any kind of style, to achieve the perfect shape and moderate austerity reaching conceptual abstraction.

The jewels in the first half of the fifties were performed preferably in silver and demonstrated the predominance of chisel work. The resulting forms were rounded, smooth, intimate and caressing the different stones. From the second half of the fifties, incorporated gold detailing and frequent agates; jewelry take more volume than in the previous stage, and forms will clear the interest of the author's work Ninon Collar.

For the realization Objects of gold, copper was used alone or combined with silver, to achieve a generous range of color schemes and textures. The figures were predominantly vertical, austere and rectilinear; forms that, in the late sixties, transport the jewels distancing themselves from the initial round and smooth to delve into a world of geometric, bold and courageous, which will increase the number of materials used --perla cultivated, Coral, lapislàtzuli, malaquita-- will adapt and also other elements of the fashion of the moment that confer a distinctive parts.

The first years of the seventies, begin experiment with the torch in order to obtain a greater variety of textures, Volume i Matīss; is performed when a jewelry homage to the recent arrival of man on the moon. The resulting pieces are a contrast of finishes, nuanced and polished metal, and sinuous lines of symmetry, from planning to i volums. The forms, There adapts preference slate and ornamental stones like lapis lazuli. Finally, and in the late seventies and early eighties, begin to experiment with the finished work and smooth flat surfaces, where alternate use of gold polished and nuanced, contrasting color with polished silver and oxidized. This work, will present a collection of pebble-inspired jewelry.

The fine jewelry and precious metal religious liturgical not intended to be excluded from the innovative nature of the artist.

Since its inception, Civit alternated practice of jewelry and silverware with paint, sculpture and performance of cribs, with which it has achieved international recognition. He has been an active member of the Association Pessebrista Barcelona, on ha impartit classes. He has also practiced photography and cinema Amator. Equally, of 1950 to the 1970, actively participated in competitions and motorcycle racing.

He was appointed president of the Artistic Circle of Horta in recognition of its dynamic participation in cultural and artistic life of this town.