published in the Journal of the Association of Women Journalists Women 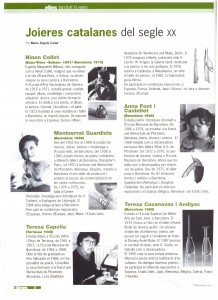 Eugenie Marguerite Millioud, aka Ninon Collar, although was born in the town of Eaux-Vives, Switzerland, developed his career at Barcelona. At the School of Decorative Arts in Geneva, of 1916 a 1921, studied engraving, cisellat, repujat, Drawing, modeling and composition acquiring, because, a solid artistic. Is engaged in jewelry, drawing, Paint, l'first, l'sculpture, i el batik. El 1923 moved his residence and workshop in Barcelona, on impartí classes. He exhibited his work in Spain, Switzerland and Mexico.

Of del 1952 the fins 1958 he studied music, Drawing, modeling and painting at the School Valleys, Barcelona, of 1958 to the 1966, technical studies about jewelery workshops in Barcelona, I Düsseldorf Paris, i the 1970 a la art work and school de Pforzheim, Germany. Following, install·the workshop in Barcelona its production process and use their collective marketing·lections. Of 1974 a 1975 Work Center Activities Research and Artistic X. Corberó, Esplugues de Llobregat. El 1984 work shop in Barcelona. He took part in numerous exhibitions in Spain, across Europe, Japan, Mexico and the United States.

He studied drawing at the School of Arts and Crafts Terrace, of 1961 a 1963, and the Massana School, of 1964 a 1968. Gets the title of the graduate in Applied Arts 1968, specializing in jewelry. Consolidate your training at the Kunst und Pforzheim Werkschule, Germany, ia la National Academy of Craft Art and Fashion, Berlin. El 1974 Berlin inaugurates, with H.Leicht and W.Krüger, la Ophir Gallery, engaged in jewelery and graphic arts. El 1978 back to Catalonia, Matadepera, work on the jewelery workshop and, to the 1982 Gallery shop the vitreousa. He has participated in numerous exhibitions in Spain, France, Holland, Japan and Switzerland, work has several museums of Europe.

Study techniques and enamel jewelery at Massana School. Of 1966 a 1974, estudiar va a la arts and business school de Pforzheim, Germany, Jewelry, design and painting. El 1968 working as a designer of unique workshops Stahl, K.G. de Pforzheim. Of 1972 a 1976, teaches design and jewelry Massana School, while working as a jewelry designer for companies. Of the 1972 has his own workshop in Barcelona. She has made artistic and technical seminars in Barcelona, Saarbrucken (Germany) i Bangkok (Thailand). He has participated in several exhibitions in Spain, Belgium, Germany and the United States.

He studied at the School of Fine Arts in St. George, Barcelona. El 1972 started in the craft workshop Bishop Aurelius graphic design and design objects of gold and jewelery, to move immediately to co·part in the study design Bishop Aurelius. El 1987 society promotes Acnode, O. Sarda, where he works as a designer.

El 1990 created his own company. Jewelry with alternating conducting sculptures. He has won several awards and has participated in various exhibitions in Spain, United States, Japan, Germany, Belgium, Sweden France and Holland.